About a hundreds years ago – yeah, I know – I’m not really that old, but still, a long time ago, I used to shoot.. with pistols and revolvers…. me and a bunch of friends. And as part of the fun we would spend time together making our own ammunition.

On one of my trips to US at that time, I thought it would be a great idea to buy my own shell casings. Especially since it was way cheaper than buying them in Norway, so I bought a bunch. For some obscure reason I never used them, and then I stopped shooting! You know how that story goes 😉

These empty shell casings have been taking up space in my storage rooms for a while now, you know, “Just in case”,and before you know it, it’s 17 years later and they are still following me around… and what the heck am I to do with empty shell casings?

Yes, you guessed it, it’s my declutter item for today… out the door… 250 shell casings went….. right into the hands of an old shooting buddy of mine.

And the agreement is, should I ever want to go for a round of shooting, he will load me up some ammo and bring a gun 😉 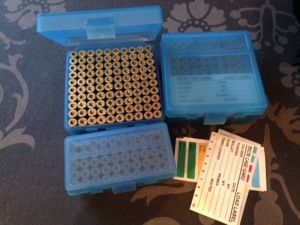