I love taking photographs, and over the years I have taken thousands and thousands of pictures.

I have a Canon 50D, a proper DSLR, but even so, it’s nice to have a small camera that can easily go into your bag.

Up until last year, I used a small Canon Ixus camera. It has gone with me everywhere, since 2002.  But last year I swapped it out, for a Panasonic Lumix DMC-TZ30, that gives me a bigger zoom range, than my old Ixus ever did.

I decided to get this, even as much as I loved my Ixus, so that I could have a decent zoom range without having to always drag my heavy DSLR with me.

As a backup, my faithful Ixus was put away in a drawer.

Yesterday though, my Ixus’s life changed slightly, when a friend from US, decided to take it with him, to the other side of the ocean, to keep as his second camera 😉

Farewell old friend – I wish you happiness, and I hope the two of you, share as many pleasurable moments as you and I did. 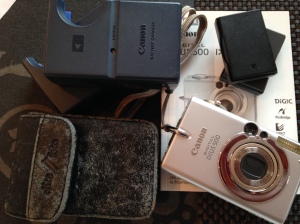