This quote found it’s way to my mailbox, and the statement is so true..

I’m guilty of having judged myself by my original intent; on what I was planning to do (even if I didn’t actually do that) while I’ve judged others by what they actually did.

I’m guilty of my behaviour not always reflecting my intentions.

I’m guilty of having given myself more “leeway”, while I have given others less or even none.

I’m guilty of having given people a hard time or even brushed them off because of their behaviour. Not having given them the benefit of the doubt.

I’m also guilty of having given people to much benefit off doubt, having looked for good intentions, that might not have been there in the first place.

How do I “judge” people?
By several things actually. How they act in public, how they speak to others, how they look, how they dress, what they say and how they say it. In a way it’s about morals, values, and ethics. There is a difference though, between people that I just pass during the day, and people that are in my life for more than a day.

For people I just pass in day, yes I judge them by their actions and I don’t always go out of my way to understand their intentions. They do say that “Actions speak louder than words”, and there are a truth to that. When it comes to people that are in my life for a longer time or even “permanently”, I try harder to find the intentions behind their behaviour. But then again, there is no doubt, I can do better…

So what does this mean?
I believe this means we should take a look at ourselves. It’s easier to to point the finger at someone else than it is to own up to our own flaws. Don’t be quick to judge anyone. Find a good median line, not to tough nor too lenient. Make sure we judge others how we expect them to judge us. Give others the same leeway we give ourselves, and give others the same benefit of doubt that we expect from them.  I believe we should strive towards having our intentions and behaviour aligned – to make sure the inside and outside convey the same message.

And when in doubt! Talk to people. Communication is the best way to avoid misunderstandings, don’t just assume we know their intentions from their behaviour. Give them a quick question about their intention, or what’s going on with them. We never know what day a person have, or what’s going on in their lives, that might affect their behaviour. Check it out… so at least you are clear about what’s going on, before you pass judgement. Make sure the “penalty fits the crime” so to speak 😉 And that goes for ourselves as well, that we are hard enough, but not too hard on how we judge ourselves.

And me? There is definitely times when my behaviour is out-of-whack, and I need to do a better job, at explaining my intention, or even say I’m sorry, when I see my behaviour is not the best (we all have bad days). I also need to get better at clarifying other peoples intention, before I let their behaviour affect too much how I feel (they might have a bad day too). There is obviously work to be done!

What about you…do your “inner and outer” send the same message? 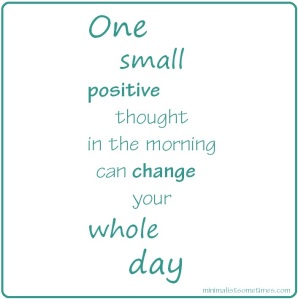 I’ve been battling a bit of a headache the last few days and it’s not exactly been doing any wonders for my mood 😉 I was sorting through some documents at my office and I came across this quote, and it hit me right in the face, and completely shifted my attitude 🙂

You know the saying “starting the day off on the right foot”. I think “starting your day with the right thought“, is the essences off that saying. One small thought, either positive or negative, has the potential to influence your whole day, or even days.

Your thoughts can colour your day. Now off course things happen and we can’t always control everything that happens around us, but what we can control is how we react to what happens.