I know I’m a bit late to the party, posting my March sum-up being we’re in May and all… but here it is anyways 😉

As my shoulder wouldn’t allow me much time on the computer since the last March update, there isn’t really all that much to tell. So this one will be short and sweet 😉

E-mails:
Even though March decluttering was mostly about cleaning up my hard-drives. I couldn’t quite leave the e-mails alone 🙂

10 228 deleted e-mails – minus the emails that have ended up “permanently” in File no 1 (yeah, you have to read February’s update for this) which are 1527 added e-mails.  That makes March/April = 8 701 decluttered e-mails

Hard-drive declutter:
Since my mid March update, I haven’t done much on the hard-drives either. You might remember I started out with about 1,001,766 files and 2,20 TB of data!

Today this is what my hard’drive is at: 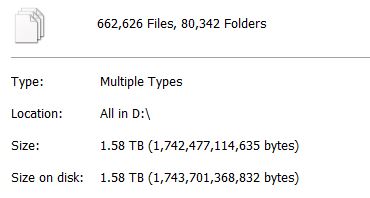 Adding it up with this years total and we get:

Yup, that’s it for this time.. told you it would be short 😉

As you all know – or at least some of you know – I’m working my way through my digital life.

After having deleted 35 360 e-mails in February, I decided to put the e-mail decluttering on hold for the month of March.

At the beginning of the year I wrote a little piece about ALL the data I have 😦 Stored on 8 external hard drive’s, 11 memory sticks, Dropbox, OneDrive, iCloud, computers etc.

I needed a game plan: So I decided to put most of the data onto one hard drive. I’m thinking that this might make it easier to consolidate and find duplicates.

And this is what I did earlier this month. I consolidated data from all my memory sticks, 6 of my external hard drives + my Dropbox and iCloud photo storage.

This is what I ended up with – one drive with:

You might notice I only consolidated 6 out of 8 hard drives.. the reason?

Over the last couple of weeks.. Iv’e been chugging along, deleting a little here and there… and I’m currently at: 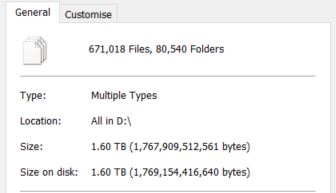 At this pace it might be months before I’m done.. but hey! This is my ONE big project this year, to get my digital life somewhat in check 😉

How are you dealing with your digital life?

You are the cutest little thing, and I love you dearly. You have served me well over the years, and I’m really sorry, my “little red one”, I think it’s time…

A couple of weeks ago I wrote an article “I’ve got my weekend cut out for me“, about setting up a computer, and some of the work involved in moving from an old to a new.  That weekend I spent my time swapping over from a computer I had borrowed, so I could get it out the door 🙂

Today (and the next days) it’s time to tackle my cute little red 13,3” laptop!

Copy everything off the old and start the hard work of sorting out what to put on the new. I’ll pretty much be following the same procedure I wrote about last time.

So far I have moved about 56 GB of data, and it’s still going strong. Turns out there is loads of photos, videos, oh yeah, and music…

I already have backups of most, but for the job at hand – I’m copying everything to a separate folder on the external hard-drive, just in case.

I can see my next task, of sorting my external hard-drives, looming in the horizon 😉 I’ll be needing at least a month, at some later time, sorting out my external hard-drives (I have several). I have to consolidate my backups and make sure I don’t have a zillion copies of everything. But, that’s another task, for another day 😉

So what am I doing with my “little red one” when I’m done? Well…

I could clean it up! It might be useful as a backup (if I could make it work properly) but it’s 7 years old, and setting it up with the latest updates and drivers, would take a bit of time.

Or, I could send it out-the-door as an items in my decluttered pile.

I haven’t really made up my mind yet, it’s a cute little computer, I really like it, and it’s hard to part with 😉

I might keep it a little longer, until I’m sure my new one works the way I want it to. I’ll let you know when I’ve had a think about it, and by the rate the backup is going… I have several days to mull it over 😉

You know how sometimes to get rid of one item, you need to do a lot off work first. Today’s item falls into that category.

I got a new laptop computer for Christmas. My old one do not function properly any more. In addition since I’m the designated computer help for my mum and step-mum, I need one that works. So what does this have to do with decluttering you might ask.

If any of you have ever changed over from one computer to another, you probably know there is some work involved. Like transferring stuff between the computers. That takes time. Well today I’m going to throw one more computer into this mix.

In addition to my old worn out one, I’ve borrowed a computer for one specific task that needed to be done a while ago. And that’s the computer I will “clean” out of my house during this weekend. My old one I will have to get back to after I’m done with this one 😉

This weekends’s task is – transfer my installed SW and documents from the borrowed computer to my new one. Clean up the borrowed one and get it out of the house. I know, it doesn’t sound much.. but I can promise you, it’s a bit of work, especially since it’s also two different operating systems and I might have to change some stuff around to make everything works as intended.

How do I go about this?

I do a little preparation first:

I start the work on my new one.

As you can see.. there is a few things to do. So, I better get started 😉

Wish me luck will you…