It’s been a while… I know, one of these days you’ll get sick of hearing me say this, I’m sure.

With my head playing up like it’s been doing the last few months, I’ve learned that I have to pace myself when doing things.

Even though you haven’t heard from me in a while, it doesn’t mean that B and I haven’t been up to anything 😉

We have been a little busy actually! Mostly doing other people’s stuff.

This is a quick recap of what we have been up to since you heard from me last:

Have we done anything for us?

Well yes, as a matter of fact… we have.

You might remember from earlier this spring that we built a patio at a friends house? From that job there was some leftover decking material.

I’ve had a couple of plans for those leftovers, among them I wanted to build a “big” planter/storage box. So about a week ago, we kinda finished that box 🙂 It’s on wheels so it’s easy to move around (it would be impossible without wheels, as it’s large enough that you would need three super strong men to move it, if it is ever filled with soil and plants).  I will be using it as a combination planting table and storage box for material, like pots, mulch, sand etc.

As I’m planning on using it as a storage box and as a planting table, I need to add a lid at some stage. A lid with not only keep everything inside dry, but also give me a surface to use as a table. I haven’t quite figured out what I want make the lid from yet. I’m thinking either treated plywood, or maybe try to make a lid with the leftover decking. When it’s done I’ll show you, but for now you can see how the box looks today. I’m really happy with how it turned out  😉

So what about decluttering?

You would think that with all the stuff going on for everyone else, that I took a declutter break! And in a way you would be right 😉

My decluttering has been a little on and off since you last heard from me. A little here, a little there….

Some of it has made it out of the house.. I’ve got pictures 😉

But some are still hanging around in my catch-all room (guestroom) – gotta take pictures for the blog and all, you know 😉

So what has actually made it out of the house? 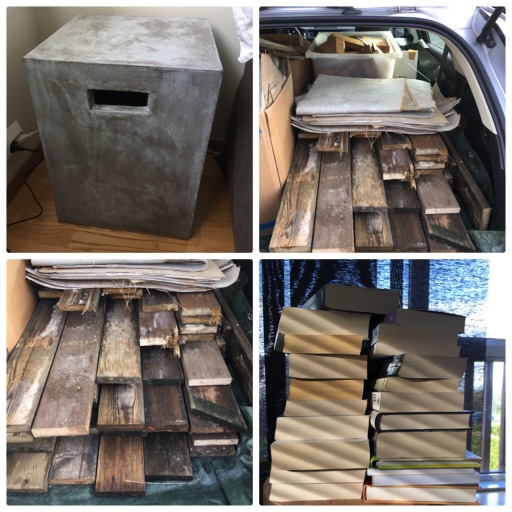 1 concrete side-table – sold today
I box filled with decking cutoffs
49 old no longer usable decking boards
(the rest  of the stuff in the car is old flooring from step mums place.. so that’s not mine to count 😉 )
21 books

Guess this is it, for now! You should be all caught up.. kinda 😉 So hang tight.. and I’ll see you soon!

9 thoughts on “Back in the groove of things!”