Remember I told your that I spent some time packing up a clock, I was going to bring with me from London back to Norway? Well it turns out that that clock would take us to the inner workings of Heathrow airport on our way back!

You see, it’s a huge clock! It has a diameter of 122 cm (48 inches). Not exactly something you put in a regular suitcase!

I bought this clock when I was in London, over Christmas last year. It used to hang behind the bar, in my brothers “local” pub, The Bridge House. My brother and his wife lived just around the corner of this pub when they first moved to London, and even though they now have moved further away, they still stay faithful to their “local” pub. And I understand why!

The people that works there are super friendly, always smiling, keen to help and they make even me who don’t get to go there often, feel like part of the family 🙂 No wonder my brother choose to hold his wedding reception in their upstairs party room. They did a wonderful job, and did I mention, their food is really good!

Darn, sitting here, writing about it, makes me miss the place! Guess we need to get back to that clock! I had been searching forever for a big clock to hang in my home, and walking into the The Bridge House, over Christmas, I saw it hanging on the wall, and “fell in love” 🙂 It was made by an local artist, and I couldn’t believe it when Wayne (the owner) let me buy it from him. Big, BIG hug, Wayne 🙂

Turns out shipping wasn’t quite as easy as we thought it would be, so we decided I would bring it back with me on the plane on my May trip.

We packed the clock into a home-made “box”, really some thin mdf type plates, added some wooden pieces, nailed it all together and taped the heck out of the edges with duck tape 🙂

I was a bit nervous about if the airline would let it on the plane, but as soon as they checked it, I felt a sense if relief.

When I turned around to leave for the passport control, I got stopped… “Not so quick madam, you need to come with us!” What the heck? With a sinking feeling I followed this guy who was rolling away my “box”.

Now what? Through some big doors we went, into a tight looooong hallway, deeper and deeper into the inner workings of Heathrow airport. The guy didn’t speak English much, so an explanations wasn’t really forthcoming!

After something that felt like we’d been walking forever (probably really about 5 or 6 minutes) we stopped. The guy tried to put the “box”, which was starting to look as big as a house, through a machine… but nope, no luck! The box was to big, so onwards we went, twisting a turning around all sorts of things, in this low ceiling, dark, tight hallway.

I was starting to wonder were in the world we were going, when he finally stopped in front of some huge doors, and with not a word, he disappeared. And there I was, way into the dark dungeons of Heathrow airport, standing there like a fool, not knowing what was going on, no one around to explain. And no way to get back!!

Suddenly the doors “exploded” open (actually pretty calmly opened, but that doesn’t make for such a good story, now does it 😉 ) and I’m beckoned through, and are met by 3 burly men standing there in their yellow vest looking at me. Oh yeah, this feels really great…

Finally someone who spoke English (sort of). Turns out the machine he was trying to get the box through was an ex-ray machine. And since the box is to big, they have to manually check the box, could I please open it!

What!! Open it, did they know how long I had spend trying to put the darn thing together, and how there are nails, and how much duck tape I had used (and how I had nothing left). Well, turns out, they didn’t care, it had to be opened!

So now this hunt starts for someone with a manual scanner, something to cut the duct tape and some tape to put it back together with.

My goodness, I’m glad I decided to add a few hours to my airport time (just in case), because this wasn’t quite the easy transit I was expecting!

Thankfully, it turns out the guy who scanned it manually, was nice enough to let me not have to open it fully. (I think this was due to me showing a picture if what was inside, and fighting like hell not to have to open all of it. Since it would be a serious pain to put it back together, and they had no tools). Turns out, all I needed to do was open the edges enough for him to stick his magic scanning wand (and arm) into the box, from two different sides. Phew!

So about one hour after I checked the “darn” thing, the box was taped back up, the guys was smiling and I was worn out, but at least free to once again, try to find passport control 🙂

Remind me, NEVER to do this again 😉

You were wondering if it made it to Norway in one piece?

Yepp, it did, here is the box, with airport tape and all! And the clock? Well it haven’t made it to the walls yet, but it’s leaning pretty comfortable to a piece of furniture, for the time beeing 😉 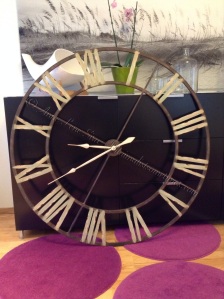 7 thoughts on “The inner workings of Heathrow airport!”