After our rather stressful day 4, our next task – putting in the new countertop – was almost (I said, almost) easy.

We had decided that the task that day, would be put in the countertop, and then relax! Little did we know it would take longer than we thought 😉

My countertop consists of a 10 mm thick laminate + a 30 mm thick aluminium list. To support the laminate, there are some support bars across the underside of the countertop. As you can see from picture 1 below. These support bars are normally spaced so that they will rest on the under cabinet walls, to make everything really strong and supporting.  On the original countertop, the support bars were placed correctly, on the new replacement countertop, they didn’t bother about taking this consideration, and it turns out the support bars were in the wrong place. As an example, one of them was right smack in the middle of where my cooker was supposed to go!

Well, that would be an easy fix. Right? Ehhh, nope! Not only was the support bars screwed on, they were also super-glued to the laminate! I think it took me half an hour just removing the one that was “in the middle of my cooker”. Oh, no… was this looking to be a long days work after all…

We decided that rather than move the other ones to the area that they needed to be, we would just add bars instead. So that’s what we did, we used the one we removed and stole one from the old countertop 😉 And what you see on picture no 1, is a countertop ready to be installed.

The installation it self wasn’t hard work, we had to juggle it a little to sneak it in between the cabinet and the backsplash above. But! Turns out I had not managed to remove enough of the old silicone that was used for the old one, so the new one wouldn’t go all the way to the wall. Darn…

Not allot of ways around that one, other than spend the next half hour, cleaning away all old silicone, and then give the wall a quick repaint to make sure it’s protected.

Have a coffee break and try again…

Second time around, woohoo,  it fit 🙂

Wonderful! So we pulled it out again, put some silicone at the wall, and underneath the backsplash fittings and showed the countertop back into it’s place. And the next half hour was spent fastening the countertop to the cabinets, just to make sure it ain’t going anywhere 😉

So NOW we could have a well deserved home-made apple juice break!!!

Followed up by a little clean-up! And as you can see, I’m putting my friend to work 😉 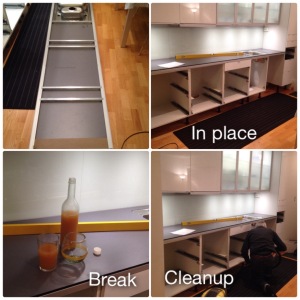