I have to admit, July was an appalling month when it comes to decluttering, which you probably have noticed, since I haven’t written about a single thing I shed.

So what have I been doing with myself in the month of July? Well as I wrote in the beginning of July, I was taking an hiatus to focus on my health.

So July month have been filled with trips to the osteopath, loads of rest, beautiful days in the garden and not to forget…

Loads and loads of time occupied with Molly, my furry friend 🙂 With her around I seemed to get “nothing” done. When I sat down to read, she wanted to play. When I worked outside in the yard, she hated being on a leash so I made “borders” so she could go loose, but I still needed to keep an eye on her whereabouts, just in case… When I ate, she wanted food. When I watched TV or had friends over, she wanted to “play” or go out for a walk, or was hungry or something.

So you can see why I got nothing done… right? 😉

Even so, when I think about it, there are actually a few things that have gone out-the-door in July…  Not only have I not written about them, but mostly I have even forgotten to take pictures of them 😦

But let’s see if I can’t manage a small recap anyhow!

Let’s see… I think that was it.. I can’t believe I ended up with the same amount of items as in June! And NO it’s not a copy/paste error – it just turned out that way!

Hmm.. if I could part with one extra book, I could beat June tally… Nope, I don’t think so.. not quite yet, gotta think about it first 😉 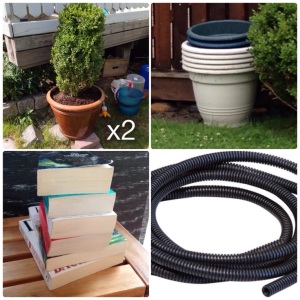